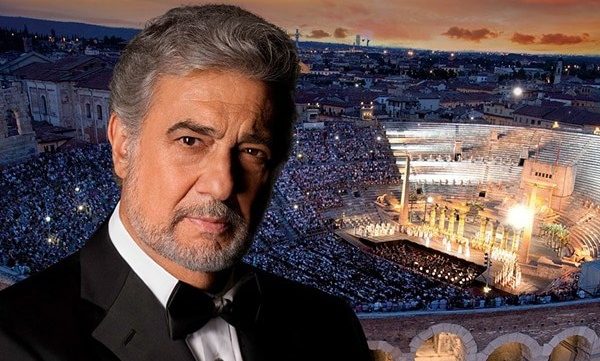 * All seats are numbered and next to each other

Tickets to see Placido Domingo, on August 6 at the Arena di Verona 2023

Plácido Domingo is back at the Arena di Verona on August 6, 2023 to regale us with his voice in a unique concert that you cannot miss. The night of opera with Plácido Domingo will be a unique occasion to pay tribute to the performances that have had the most importance in shaping his career and making him famous and venerated. Book your tickets now on our web before they are sold out.

José Plácido Domingo, born in 1941, is one of the most important opera singers and a celebrated orchestra conductor. He’s celebrated for his impressive track record (over 100 operas recorded) and his versatility. He’s sung in most languages at the most important theaters around the world.

Although Domingo has performed as lyric tenor for most of his career, he’s also played parts for dramatic tenors. Among the over 150 roles he’s played, his performances as Otello and Simon Boccanegra are most prominent.

But besides his talent for bel canto, he has also enjoyed some success singing Latin and popular music: he’s won 14 Grammy Awards and has sold thousands of copies of his CDs around the world.  He has also starred in many films, almost always under the direction of Franco Zeffirelli.

The peak of his career came in 1990 when he joined his tenor colleagues Luciano Pavarotti and José Carreras to create The Three Tenors. Their first record was the best-selling album in the history of lyric music.

Book the tickets from our website to enjoy this wonderful opera in a night at the Arena di Verona that you will never forget.

We use cookies on our website to give you the most relevant experience by remembering your preferences and repeat visits. By clicking “Accept”, you consent to the use of ALL the cookies, However you may configure Cookie Settings to provide a controlled consent.
Read More Cookie settings ACCEPT
Manage consent

This website uses cookies to improve your experience while you navigate through the website. Out of these cookies, the cookies that are categorized as necessary are stored on your browser as they are essential for the working of basic functionalities of the website. We also use third-party cookies that help us analyze and understand how you use this website. These cookies will be stored in your browser only with your consent. You also have the option to opt-out of these cookies. But opting out of some of these cookies may have an effect on your browsing experience.
Necessary Always Enabled
Necessary cookies are absolutely essential for the website to function properly. These cookies ensure basic functionalities and security features of the website, anonymously.
Functional
Functional cookies help to perform certain functionalities like sharing the content of the website on social media platforms, collect feedbacks, and other third-party features.
Performance
Performance cookies are used to understand and analyze the key performance indexes of the website which helps in delivering a better user experience for the visitors.
Analytics
Analytical cookies are used to understand how visitors interact with the website. These cookies help provide information on metrics the number of visitors, bounce rate, traffic source, etc.
Advertisement
Advertisement cookies are used to provide visitors with relevant ads and marketing campaigns. These cookies track visitors across websites and collect information to provide customized ads.
Others
Other uncategorized cookies are those that are being analyzed and have not been classified into a category as yet.
Save & Accept
X
X